Note: this was written around the end of December 2012, when some iCloud issues were reported around the web.

A week ago I started getting reports of Chronicle 2 getting stuck at the "Loading..." screen. I wasn't able to reproduce the issue but noted from the crash logs that Chronicle 2 aborted after iCloud timed out during initialization. It seemed to happen to iOS 6.x devices; no problems were ever reported under iOS 5 since the app's release.

The past few days have been very busy on the Apple Developer forums. Quite a few developers, some of them running Apple iCloud example code, are seeing the same issues. Customers are naturally upset. Worse, the Apple iCloud status page doesn't show any issues.  At this point there isn't an official solution. I'm frustrated because I depend on iCloud for sync; it handles a lot of work for me and people love it, but I have no way to see what's happening behind the scenes.

If you're having trouble with Chronicle 2 there are a couple things you can try:

Try restarting your device(s). Hold the round button and the top button and slide to power off. 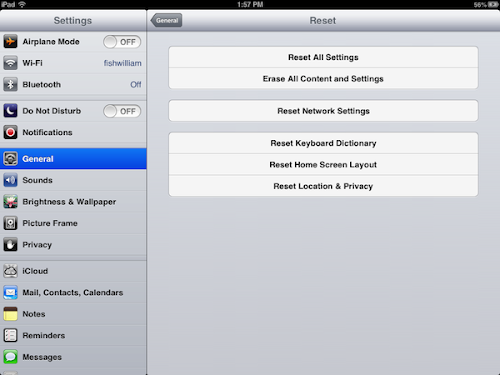 You won't lose data by doing this, but it is annoying to have to do because you'll have to re-enter your WiFi password and set up your background wallpaper. This cleared up the "Loading..." issue for some people.

Before deleting the app, you should create a backup of your data. If you just installed the app and haven't written anything, don't worry about creating the backup. 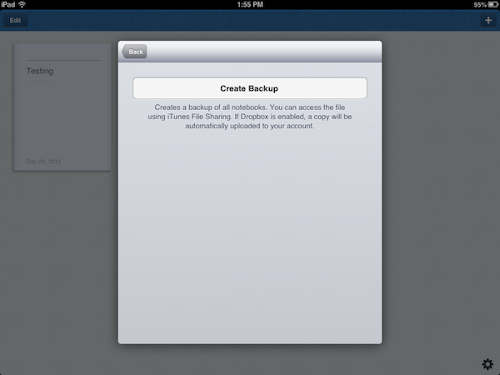 Create a backup from the app's settings. If you have Dropbox enabled the .cbackup file gets uploaded after you create it; if not, save it to your computer using iTunes File Sharing.

Once you have a backup file, you can delete the app from your device(s). To clear the app's data from iCloud, you'll need to go into the Settings app and delete all app data. 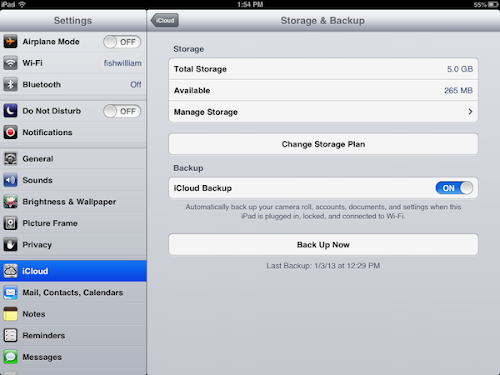 Tap on Manage Storage to manage your iCloud storage settings 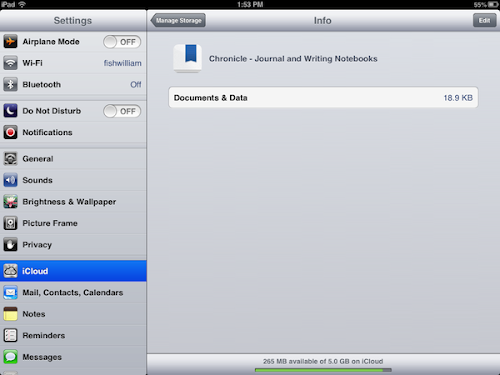 Once you see Chronicle 2, you can tap Edit and then delete all app documents and data.

Finally, wait 10 minutes for the changes to propagate. After that you can reinstall the app. Import the backup file you created previously on one of your devices (let the data sync to any other devices you might have).

You can contact me from the app's settings if you need help. An official fix from Apple (or a workaround from me) will hopefully follow shortly.